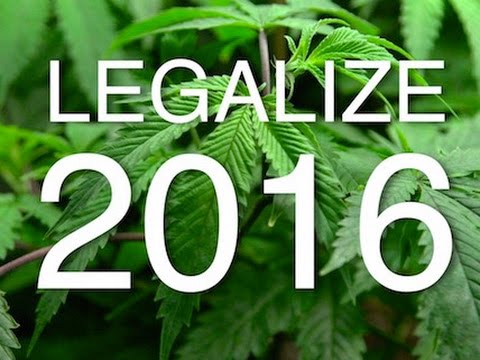 While most people watched the presidential election in horror on Tuesday night, something else, quietly but surely, happened on Election Day: Marijuana legalization won. In fact, it won in several states in an election when liberals by and large seemed to lose across the board.

The key state here: California. There, voters overwhelmingly approved legalization meaning the country’s most populous state and biggest economy will now move to let people buy marijuana for recreational use and, most importantly, let for-profit companies come into supply all of that pot.
Obviously, by itself this is a huge symbolic victory. But there is a very practical effect, too: It means that big companies now have a massive economy to flock to and grow their pot businesses.

In comparison, California alone holds 38.8 million people and is worth around $2.5 trillion. That’s nearly twice as populous and more than twice as wealthy.

With such size, California isn’t just a bellwether for the national trend toward legalizing pot. It’s a bullhorn.

It would be one thing if this were just wacky liberal California doing something weird. That’s how some critics characterized the state’s legalization of medical marijuana in the 1990s at first until dozens of other states followed suit, to the point that more than half the states now allow medical pot.
Yet the polls suggest this isn’t just something that California wants to do, but that a majority of Americans want to do.

The Pew Research Center’s surveys illustrate the trend: In the 1990s and early 2000s, support for legalization was fairly low hovering around the 20s and 30s. In 2016, 57 percent of US adults say marijuana should be made legal, compared with 37 percent who say it should remain illegal.

As Pew’s numbers show in the chart above, support is rising in every generation. But crucially, millennials are particularly supportive a sign that as that generation ages and becomes a bigger share of the overall population, it will continue to push the country toward heavily favoring legalization.
California could also give more credibility to this movement. If nothing big goes horribly wrong (just as nothing big has gone wrong in Colorado or other legalization states), then the nation’s most populous state making up more than one-tenth of the US’s population could show everyone else that this isn’t the huge disaster drug warriors have long warned about. In fact, it might even bring in some big tax revenue and create a lot of jobs.

But California could have another, perhaps more subtle effect too.

California sets the stage for big marijuana playing a bigger role in ballot initiatives
Given the reputation of California’s medical marijuana industry, it might be easy to understate the scope of what the state did on Tuesday. After all, it’s already fairly easy to get pot in California you can just stroll down to Venice Beach in Los Angeles, pay $40 or so for a medical marijuana card, and legally buy some premium bud.

But there is a vast difference in scale between Venice Beach’s local medical pot shops and the burgeoning multi-state marijuana industry that can rise from full legalization.

Market analysts have backed this up: One report from researchers at the investment bank Cowen estimated that legalization in California alone will triple the size of the nation’s current $6 billion legal pot industry within a decade. Another report from ArcView Market Research estimated that legalization in California would create a new $6.5 billion market for legal use by 2020.

This does a few things that will make it a lot harder to contain marijuana legalization in just a few states.

For one, the market will be so huge that it will be difficult to avert smuggling from the state. There are already reports of Colorado pot making its way around the nation. Now imagine the potential impact of a market that is many times the size of Colorado. (Not to mention the other states that legalized last night.)

THE BIG MARIJUANA INDUSTRY, JUST LIKE ANY OTHER FOR-PROFIT INDUSTRY, WILL WANT TO GROW

The other consideration is that the big marijuana industry, just like any other for-profit industry, will want to grow. The obvious pathway to doing that is legalizing pot in the dozens of states where it remains illegal.

With many, many more customers thanks to California’s decision alone, the industry will suddenly have more profits that it can then use on a time-honored tradition in American politics: lobbying. The alcohol industry, for example, has successfully fought off all sorts of regulations and taxes over the years. The marijuana industry has a much bigger hurdle to fight than taxes in prohibition, but it now has a clear model for doing this: ballot initiatives.

The big problem with ballot initiatives is they can cost a lot of money. Whenever I ask legal pot activists why, for example, it took so long to get medical marijuana which now polls very well virtually everywhere in Ohio and now Florida, the response is usually that those states are very expensive to run ballot initiatives in.

Well, there’s now going to be a rapidly growing industry to cover those expenses.

On some level, we have always known that,? he said. ?And I think 2016 may be the last year in which drug policy reform organizations, driven primarily by concerns of civil liberties and civil rights and other good public policy motivations, will be able to significantly shape the legislation. And I assume that as the years progress, various industry forces will loom ever larger.

Legalization advocates have had public support on their side, particularly in the more liberal states, for years. With a big marijuana industry in California, they may now get more money to actually put those ballot initiatives in front of voters.

For years, Congress has for the most part ignored the spread of marijuana legalization. As legalization continues to spread, this is going to become less and less defensible.

Technically, marijuana is still illegal under federal law it is Schedule 1, the strictest classification in the drug scheduling system, and it has criminal penalties attached to it. The federal government has mostly ignored that contradiction and decided to let states legalize as they please, with minimal interference.

But this contradiction in state and federal laws creates other problems. For one, banks are generally afraid of doing business with marijuana growers and shops after all, it could put the bank in the awkward position of essentially taking part in an illegal drug industry. This has forced many pot businesses to function as cash-only businesses. That’s not only burdensome for pot businesses but also potentially dangerous, since it makes them better targets for would-be robbers.

Another hurdle: Due to a tax rule known as 280E, marijuana businesses can’t file for a bunch of deductions that businesses are normally entitled to, pushing their effective income tax rates to as high as 90 percent.

DOES CONGRESS REALLY WANT TO LET STATE BALLOT INITIATIVES, WHICH CAN BE RIFE WITH PROBLEMS, DECIDE THE FUTURE OF A MAJOR DRUG POLICY ISSUE?

Then there are the broader policy issues: Does Congress really want to let state ballot initiatives, which can be rife with problems, decide the future of a major drug policy issue? Is Congress really okay with the creation of another for-profit industry focused on marketing and selling a recreational drug, given the track record of the alcohol and tobacco industries? Do federal lawmakers really not want to make sure there’s at least some regulatory floor for how marijuana is grown, transported, advertised, and sold? Is Congress really going to do nothing as a giant new industry takes root in America?

It simply doesn’t make sense for Congress to simply ignore these issues, considering that federal law plays a direct role in all of them. It was already pretty bad for federal lawmakers to play ignorant when Colorado and Washington legalized in 2012, but with the biggest state in the country now allowing the recreational use and sales of marijuana, it’s completely ridiculous.

President Barack Obama, in an interview with comedian Bill Maher, acknowledged as much shortly before multiple states voted to legalize on Election Day: If in fact it passed in all these states, you now have about a fifth of the country that’s operating under one set of laws and four-fifths in another. The Justice Department, DEA, FBI, for them to try to straddle and figure out how they’re supposed to enforce laws in some places and not in others they’re gonna guard against transporting these drugs across state lines, but you’ve got the entire Pacific corridor where this is legal that is not going to be tenable.

One point of uncertainty: President-elect Donald Trump. Trump has suggested that he is okay with letting states legalize on their own. But his administration, especially one in which an anti-legalization figure like Trump ally and New Jersey Gov. Chris Christie holds sway, could try to clamp down on states legalizing. Or the Trump administration could continue the hands-off approach of the Obama administration. We just don’t know what Trump will do on this issue.

Still, as it stands now, it sure looks like marijuana legalization and the big industry that could be behind it are coming. Staying in denial about that won’t change the reality.

adminAfter A Huge Election Victory, What’s Next For Marijuana?01.07.2017