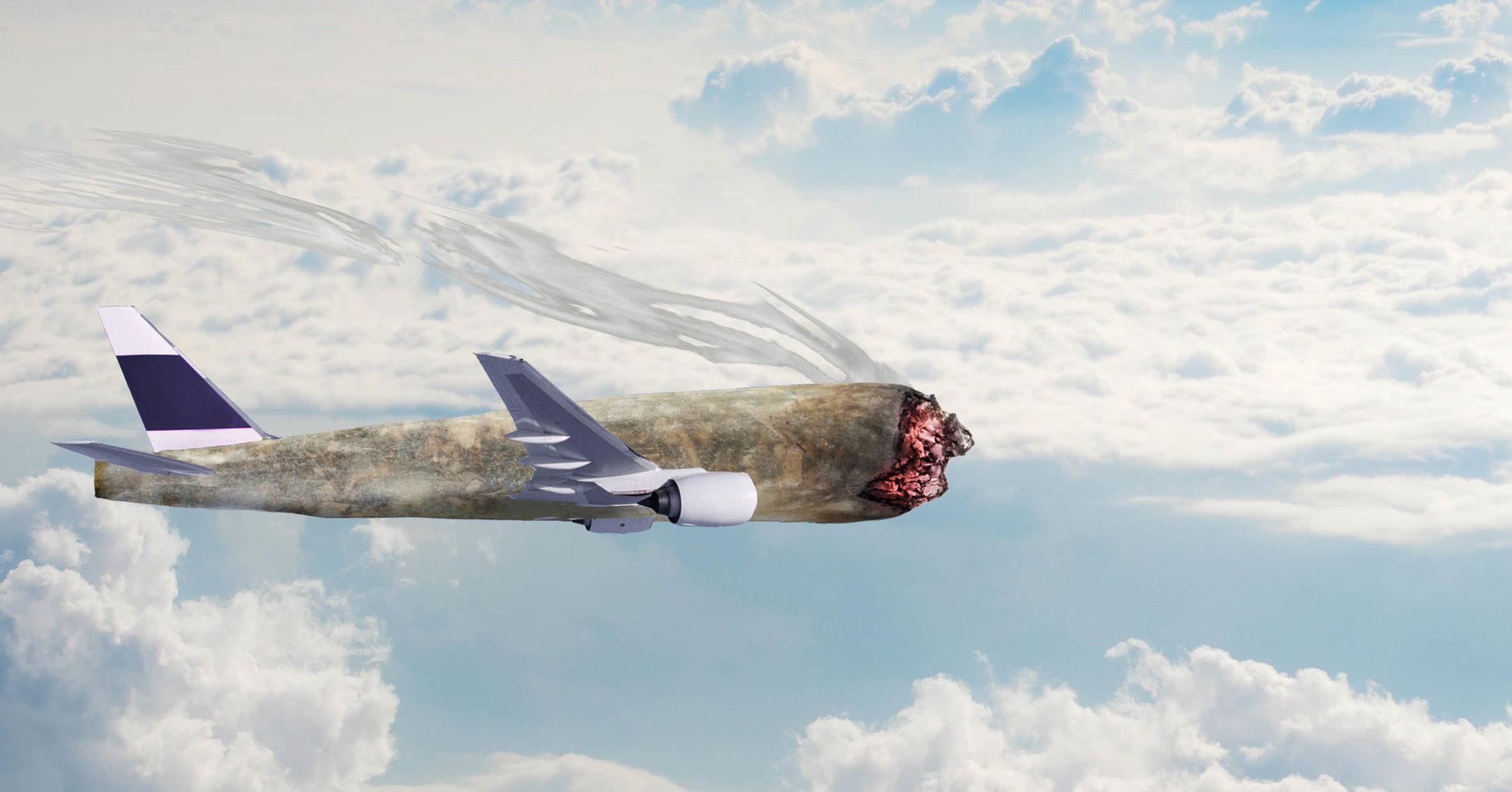 Buds, oils, tea, brownies, cookies, gummies, lollipops ― today, you can get THC in just about any form.

What a time to be alive.

Marijuana is legal in some capacity in 29 states and Washington, D.C. As long as you adhere to local laws, you don’t have to worry about the cops harshing your buzz. That is, unless you’re headed to the airport.

The rules surrounding domestic air travel and marijuana possession can seem confusing and contradictory. For example, if you bought weed legally in Colorado, can you take your leftovers home to another legal state like California? The answer might surprise you.

We talked to several experts in Los Angeles ― one of the largest weed-friendly U.S. cities and home to one of the busiest airports in the world ― about what you should know before attempting to fly with legally purchased marijuana.

The tangle of laws is “total chaos.”

On the federal level, marijuana is considered a controlled substance, just like cocaine or heroin. So even if marijuana is legalized in your state, it’s still technically illegal in the eyes of Uncle Sam.

And though airports are owned by the city, “the feds are authorized to operate it … so federal law prevails,” said criminal defense attorney Jonathan Mandel. “Once you enter security, federal law trumps state law.”

That means even if you purchased your weed legally, it becomes illegal as soon as you flash your boarding pass to a Transportation Security Administration agent.

“It is total chaos in terms of congruence between federal law and state law,” said Irán Hopkins, an attorney in the cannabis industry group at the national law firmAkerman. Not only are federal and state laws contradictory, she said, but rules surrounding the possession and use of marijuana vary across states and even airports.

But will you actually get in trouble?

The TSA’s primary job is to make sure another 9/11 never happens. Agents are more concerned about whether there’s a bomb in your shoe than a little weed in your bag.

“TSA’s focus is on terrorism and security threats to the aircraft and its passengers,” said TSA spokeswoman Lorie Dankers in a statement to HuffPost. “TSA’s screening procedures, which are governed by federal law, are focused on security and are designed to detect potential threats to aviation and passengers.”

In other words, they’re not looking for drugs. That’s the job of local law enforcement and federal drug agents. You’re likely to cause more of an uproar with the TSA by leaving a water bottle in your backpack.

That said, it doesn’t mean you’re in the clear.

“As has always been the case, if during the security screening process a TSA officer discovers an item that may violate the law, TSA refers the matter to law enforcement,” Dankers said. According to the TSA website, illegal items include marijuana and cannabis-infused products such as CBD oil.

Nor does the TSA take into account your originating and destination airports, Dankers added. So if you run into a particularly grouchy TSA agent or attempt to get through security with an egregious amount of weed, you will likely be handed over to airport police no matter where you’re coming from or going.

According to Dankers, however, what happens next is up to local law enforcement’s discretion.

When you get busted…

Once the police are involved, there are a number of possible outcomes. In some airports, such as McCarran International Airport in Las Vegas or Aspen-Pitkin County Airport in Colorado, where recreational use is legal, you might be asked to dump your marijuana in an “amnesty box” or simply toss it in the trash, according to Mandel.

In other cases, the officer might decide to allow you through security with your marijuana, especially if you have a prescription.

Then again, you could be arrested.

“It is still illegal under federal law,” said Akerman attorney Michelle Lee Flores. Although local law enforcement might not pursue any charges, “there is a possibility to be arrested and prosecuted under federal law.”

Even so, it’s unlikely you’d be charged with a federal crime unless you attempt something especially brazen.

“Under California law, for example, it’s still a felony to transport for-sale marijuana out of state,” said Allison Margolin, one of the nation’s leading attorneys in cannabis law. “Usually, I can get the charge dismissed if I can persuade the DA that they were using it for personal use,” she said.

Cases that do make it to court are typically tried on the state level, according to Margolin. “Usually, it can be resolved relatively favorably for [the defendant],” she said.

In most cases, law enforcement simply isn’t interested in prosecuting travelers carrying small amounts of marijuana, according to Mandel.

“They’re not going to do anything unless there’s such huge poundage or money involved that they believe it’s … for profit rather than personal use,” he said. “It’s pretty clear it’s an extremely low priority.”

Bottom line: Carry at your own risk.

Even though catching travelers with marijuana is low on the TSA’s list of priorities, there’s no way to predict how TSA and local law enforcement will handle the situation.

“It’s really a risk assessment and an assumption of that risk by the passenger,” said Hopkins. “Our conservative advice is to be super careful and don’t expose yourself unnecessarily to breaking the law.”

If you do decide to take the risk of flying with legally purchased marijuana, the attorneys shared factors you should consider first.

“Minimize anything that would get the attention of the TSA” while going through security, Flores said. That includes carrying bottled water, contact lens solution and other liquids. Don’t pack anything that could be considered a weapon. And it might go without saying, but being noticeably under the influence is another red flag.

Rather than the plant or oils, edibles “would be harder to detect,” said Flores, since most products are discreetly packaged to look like everyday food items. Oils or other liquids will undoubtedly catch an agent’s eye, while marijuana in plant form will likely give off a scent.

Some moves could make you look like a dealer. That’s bad.

Many of the cases that end up in court do so because it appears the passenger intended to distribute. According to Margolin, you should avoid separating your stash into multiple packages or carrying a lot of cash. It’s also best if you’re carrying only a small amount of marijuana.

“The lowest amount [of marijuana] I’ve seen prosecuted is a pound,” she said, referring to airport arrests.

There are legal options too.

If you’re not interested in breaking the law but don’t want to travel without some form of relief, Margolin suggested talking to your doctor about Marinol, a drug containing synthetic (and therefore legal) THC.

“It’s a Schedule III drug and you can get it prescribed by a doctor,” Margolin said. “It’s like eating an edible, but it doesn’t have all the other cannabinoids.”

If you do find yourself in hot water, simply keep your mouth shut and cooperate.

“You should not try to talk your way out of the situation to the TSA, the police or anybody,” Margolin said. “There isn’t an actual defense for any interstate transportation.”

Instead, she said, “hire an attorney.”