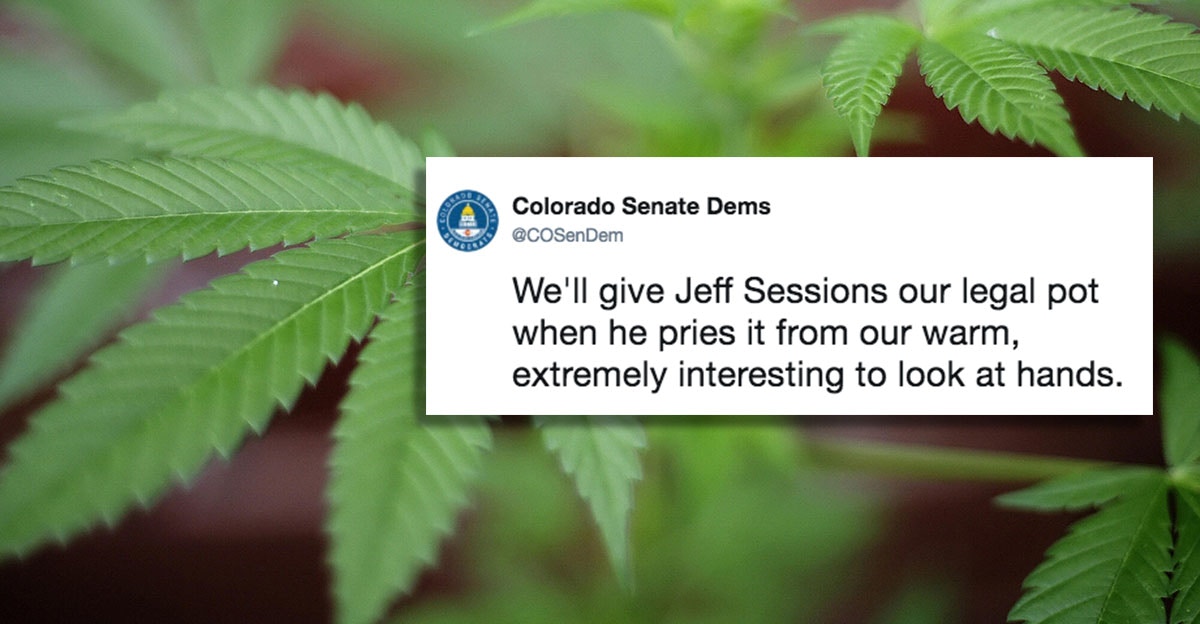 Earlier today, real-life “Dukes of Hazzard” villain Jefferson Beauregard Sessions III announced plans to crack down on marijuana in states that have legalized it.

In a three-paragraph Justice Department memo, Sessions directed U.S. attorneys to disregard past policy about turning a somewhat blind eye to pot when it came to the more than two dozen states that have legalized it for medicinal or recreational use, saying, “Today’s memo on federal marijuana enforcement simply directs all U.S. attorneys to use previously established prosecutorial principles that provide them all the necessary tools to disrupt criminal organizations, tackle the growing drug crisis, and thwart violent crime across our country.”

The official Twitter account for the Colorado state Senate Democrats took aim at Sessions’ push in a thread equal parts informative and amusing.

Legal weed has been around in Colorado for quite awhile, with voters approving a medical marijuana ballot measure way back in 2000, and giving the thumbs up to recreational use in 2012.

By most accounts, legal weed in Colorado has been a pretty big hit  — which Colorado’s Senate Democrats laid out in excruciating detail.

Hearing news about Sessions’ plan to fight the states on this, they kicked off an epic Twitter thread with what’s just a clearly great joke: “We’ll give Jeff Sessions our legal pot when he pries it from our warm, extremely interesting to look at hands.”

We’ll give Jeff Sessions our legal pot when he pries it from our warm, extremely interesting to look at hands. https://t.co/LF0RpdCiHG

With that one-liner out of the way, they laid out a really strong case for letting states handle this. For one, it’s really, really been great for the economy. “Since legalization, marijuana has generated $617,767,334 in tax revenue,” read one of the tweets. “Instead of going to drug cartels, that money helps fund our schools and addiction treatment programs for more dangerous drugs.”

The marijuana industry supports hundreds of small businesses across our state.

Since legalization, marijuana has generated $617,767,334 in tax revenue. Instead of going to drug cartels, that money helps fund our schools and addiction treatment programs for more dangerous drugs.

They went on to list a number of projects funded by the state’s “Build Excellent Schools Today Act” program, which gets some of its funding from marijuana taxes.

For example, the BEST program receives millions of dollars in marijuana tax revenue to help build or improve schools in rural Colorado.

Here are some projects we’ve funded for our kids that would be out millions of dollars if Jeff Sessions had his way.https://t.co/M5lSTOKcU5 pic.twitter.com/19FTvboAld

“Is your school’s roof TOO NICE?” another tweet read. “Jeff Sessions is on the case.”

New roofs for schools in El Paso and La Plata counties. Fire suppression emergency generators for a school in Durango. Renovations for a school in Ouray. Marijuana tax revenue helped fund them.

Is your school’s roof TOO NICE? Jeff Sessions is on the case. pic.twitter.com/Uvnoigux6C

They concluded as they started: with a joke. “If only there was some way we could mellow him out,” they pondered.

Instead of using taxpayer resources to go after a drug that’s safer than alcohol, Jeff Sessions should focus on political corruption and white collar crime. Seems like there’s plenty of that to go around in DC.

If only there was some way we could mellow him out 🤔

Public opinion on marijuana legalization continues to steadily climb, marking Sessions for the political anachronism that he is.

According to an October poll from Gallup, 64% of Americans think it’s time to legalize pot. The truth is that most people simply don’t care what others decide to do with their body and their free time. By and large, it’s not dangerous — at least no more than alcohol or cigarettes — and its reputation as a “gateway” to harder drugs has been mostly debunked.

Sessions’ vendetta against marijuana is widely known. He’s said “Good people don’t smoke marijuana,” and in the 80s remarked, “I thought those guys [the Ku Klux Klan] were OK until I learned they smoked pot,” and as recently as last March, suggested that it’s just as dangerous as heroin. We get it, Jeff. You don’t like pot.

I asked @realDonaldTrump about the possibility that his AG pick might try to shut down #marijuana legalization.

Even Cory Gardner, Colorado’s Republican senator, understands that beefing up federal enforcement of anti-pot laws isn’t what the country needs right now, threatening to use his power to grind Justice Department nominees to a halt. Gardner votes in line with the Trump’s and Sessions’ agendas nearly 95% of the time, so this type of fierce opposition should send a strong message.

I am prepared to take all steps necessary, including holding DOJ nominees, until the Attorney General lives up to the commitment he made to me prior to his confirmation.

If there’s one thing we can all learn from this, it’s how hollow the convictions of those who champion “states’ rights” and “small government” can be.

Whether it’s in fighting states’ abilities to enact their own laws around pot, micromanaging what a woman can do with her uterus, demanding to know what a trans person’s genitals look like, or dictating who has the right to protest for racial justice and how they should do it, “small government” often means complete authoritarian control. Perhaps these politicians should heed a bit of their own rhetoric. “Don’t tread on me,” right?

A marijuana-based medicine has been approved by the FDA. It’s a sign of hope.