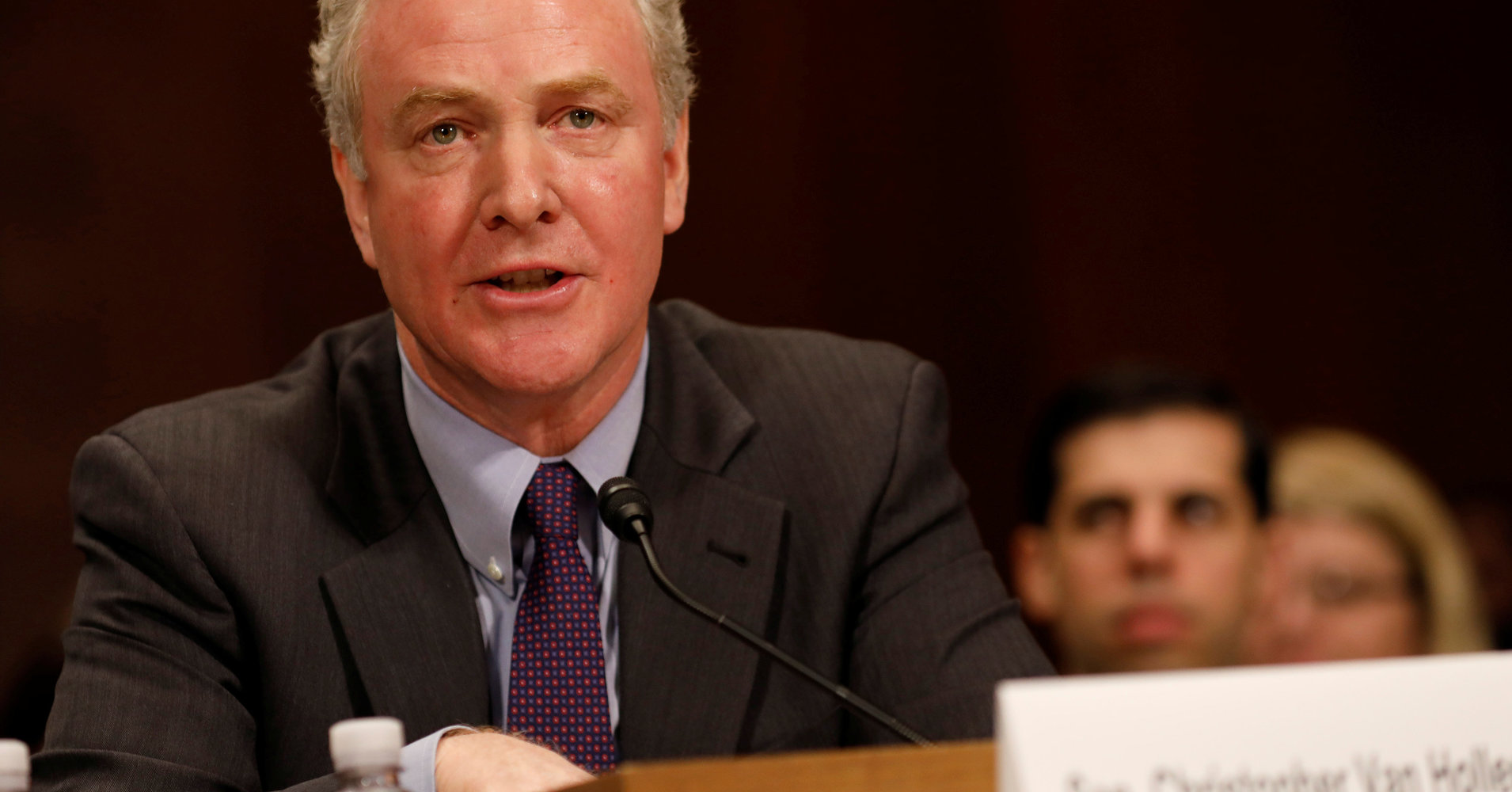 WASHINGTON ― Leading Democrats blasted Attorney General Jeff Sessions’ Tuesday announcement that he would open the door to a federal crackdown on states that have decriminalized forms of marijuana use.

Sessions’ action reverses a Department of Justice policy from the Barack Obama administration that effectively shielded those states from federal prosecution.

Sessions “needs to focus on issues like transnational criminal organizations” and what the nation needs to do on “investigating and prosecuting human trafficking,” Sen. Kamala Harris (D-Calif.), a rumored 2020 presidential candidate, told HuffPost on Tuesday.

Sessions “needs to leave grandma’s medicinal marijuana alone!” she continued with a chuckle.

Sen. Mark Warner (D-Va.), a centrist, declared that the move “would seem to be the absolute opposite direction of where the country’s headed and one more example of this administration being completely out of step with where both Americans are headed and, for that matter, Democratic and Republican state legislatures.”

“This is a big mistake,” Sen. Chris Van Hollen (D-Md.) told HuffPost. “In those states where the people in the states have made a determination to decriminalize or legalize marijuana … the federal government would better spend its resources going after real problems we’ve got.”

But when asked whether Democrats planned to use the marijuana crackdown against Republicans in the November elections, some of the same Democrats were noncommittal.

“It’s way too early to predict that,” Warner said.

Sen. Mazie Hirono (D-Hawaii), who also expressed her displeasure with Sessions’ decision, argued that Democrats ought to run on kitchen-table economic issues rather than marijuana.

“There are so many other things to run on, like the tax bill that just passed that does not help working families at all,” she said in an interview.

The Democratic Congressional Campaign Committee did not respond to multiple email requests for comment on the political salience of Sessions’ move. The DSCC referred HuffPost back to Van Hollen’s remarks.

Part of the challenge for Democrats who might want to turn Sessions’ move into a partisan issue is that so many of their Republican colleagues responded with similar outrage. Lawmakers from states that have legalized the drug, including Sens. Cory Gardner (R-Colo.) and Lisa Murkowski (R-Alaska), were especially firm in their criticism. In a scathing floor speech, Gardner, who chairs the National Republican Senate Committee, the GOP Senate’s campaign arm, said he was “prepared to take all steps necessary” to get Sessions to reverse the decision, including holding up Department of Justice nominees.

Warner and Hirono both cited Republican condemnations in explaining the difficulty of making marijuana an election-year issue.

Still other Democrats were reluctant to even condemn Sessions’ order. Sens. Bob Casey (Pa.), Jack Reed (R.I.) and Tammy Baldwin (Wis.), who faces a tough reelection battle, all said they were still too unfamiliar with Sessions’ action to comment.

Jeff Hauser, a former political communications chief at the AFL-CIO who runs the progressive Center for Economic and Policy Research’s executive branch accountability project, observed that congressional Republicans, partly at the prodding of the libertarian-leaning Koch brothers, have warmed to criminal justice reform in recent years.

But Democrats would be mistaken to think that they are forfeiting opportunities for bipartisan progress by making an unrepentant drug warrior like Sessions a political liability for Republicans, according to Hauser.

“If Democrats get elected in part on this platform, that will ultimately make passing a [bipartisan reform] bill more likely because Republicans will want to put the issue in the past,” Hauser said. “The way you get Republicans to repudiate hacks like Jeff Sessions is by causing them to pay a political price.”

At the state level, Democrats appear less hesitant to make marijuana a significant part of their electoral strategy.

Sessions’ action “will be a net positive for Democrats pretty much everywhere,” said Jared Leopold, communications director of the Democratic Governors Association.

“I don’t see this as a winner for Republicans anywhere,” Leopold added. “But it’s especially a problem in a state like Colorado, where marijuana is a major source of revenue for the state government.”

Dr. Abdul El-Sayed, a former Detroit health director running for the Democratic gubernatorial nomination in Michigan, where legalization is likely to be on the ballot in November, vowed in a statement that, if elected, he’d “fight [the crackdown] tooth and nail.”

In Nevada and Colorado, two states with legal recreational pot where Republican attorneys general are seeking the GOP gubernatorial nomination, the Democratic Party was eager to jump on Sessions’ announcement.

By contrast, Colorado Attorney General Cynthia Coffman, a Republican who is running against Polis and Kennedy, reaffirmed her commitment to defending the Colorado law but declined to criticize Sessions’ decision. Coffman noted that it would still be up to federal prosecutors’ discretion and consequently admonished residents to “not freak out.”

Nevada Democratic Party spokeswoman Hellen Kalla called on state Republicans, including Attorney General Adam Laxalt, to “clearly and firmly commit to standing up against any meddlesome attempt by the Trump administration to infringe upon our state’s right to grow our economy as our voters see fit.”

Nevada Democratic gubernatorial candidate Steve Sisolak denounced the move as well, declaring, “We cannot and will not stand for this or any threat by the Trump administration to undo progress in Nevada.”

But Laxalt, one of Sisolak’s opponents, merely offered a statement highlighting his past willingness to defend the state’s marijuana law against legal challenges despite his opposition to the ballot measure that legalize it.

The polling on marijuana legalization suggests that it could be a potent issue at the ballot box. Nationwide, 64 percent of Americans support legalizing marijuana, an increase from 12 percent in 1969, according to Gallup.

Since Democrats struggle to turn out infrequent voters during the midterms, the galvanizing power of protecting state-level marijuana laws could work in their favor. In 2014, the last nationwide midterm election cycle, 69 percent of voters in a pre-election poll said they were more likely to turn out if a marijuana legalization proposal were on the ballot.

It is far from clear, however, that marijuana initiatives ultimately provided Democrats a meaningful boost in 2014. The party continued its midterm losing streak that year, prompting the Democratic National Committee to release an autopsy with recommended improvements a few months later.

“I don’t see this as a partisan issue,” said Tom Angell, founder of the nonprofit Marijuana Majority. “Either party that wants to latch on to this will find that it will benefit them. The opportunity is there.”

When you are looking at races that are potentially going to come down to a few hundred votes or a thousand votes, shit like that matters. Liz Mair, GOP strategist

But the circumstances this fall are different from 2014 and more likely to benefit Democrats, according to several political strategists from both parties. There are now 29 states that have legalized some form of recreational or medical marijuana, including several, like Colorado, Washington and California, where it is already ingrained in the economy and culture.

And with Democrats poised to ride a midterm election wave, Sessions’ marijuana offensive could further tip the scales against the GOP, these strategists say.

Assuming federal prosecutors take advantage of the new powers Sessions has granted them, it is likely to be the most politically damaging in GOP-held swing districts with a higher proportion of libertarian or socially liberal voters, such as Washington’s 8th and California’s 45th, according to GOP strategist Liz Mair.

“When you are looking at races that are potentially going to come down to a few hundred votes or a thousand votes, shit like that matters,” said Mair, who has advised leading conservatives, including Wisconsin Gov. Scott Walker (R).

Sunjeev Bery, a progressive strategist who has worked for MoveOn.org and the ACLU, predicted that “campaigning on that heavy-handed response is going to peel off independent voters, especially in places like Colorado.”

What’s more, Bery said, “if the Trump administration goes after marijuana users in a state like California, that will significantly hurt their fundraising in high-net-worth libertarian communities like Silicon Valley.”

Hauser of the Center for Economic and Policy Research argued that the marijuana crackdown buttresses an existing Democratic narrative about the Trump administration’s misplaced law enforcement priorities ― whether it involves police brutality or white-collar crime.

“It can bring home to people who may or may not have been following other issues closely that Trump is a destabilizing force, and things that people have grown to rely on, including access to marijuana, can be taken away from them,” Hauser said.

That message would likewise appeal to conservative-leaning libertarian voters fed up with federally driven encroachments on civil liberties, states’ rights or “free trade, free movement of people-type stuff,” according to Mair.

“That just doesn’t play out West. And this fits into that narrative and that problem,” she said.

Some progressives are already concerned, though, that Democrats are too timid to capitalize on Sessions’ action.

In an NBC News column Thursday, New York City-based activist Sean McElwee appealed to Democrats to, among other things, abandon their historic reluctance to make marijuana reform a theme in campaign advertisements.

“To really set their sights on large-scale change, top Democrats need to stop being so squeamish and lead with weed,” McElwee wrote.

Castigating Democrats for their lack of backbone is a familiar refrain from the the party’s progressive base.

And there is evidence to support their arguments. A widely cited 2013 study co-authored by two researchers at the University of California, Berkeley, and the University of Michigan found that politicians in both parties assume that their voters are more conservative than they actually are.

But Mair said that Sessions’ action would hurt Republicans at the ballot box regardless of how well Democrats campaign on marijuana policy.

“Individual candidates are capable of overcoming” damaging national narratives, Mair said. “But your average congressional candidate from either party is not going to be a rockstar.”

“Democrats don’t need to message on it,” she added. “The point will be made.”