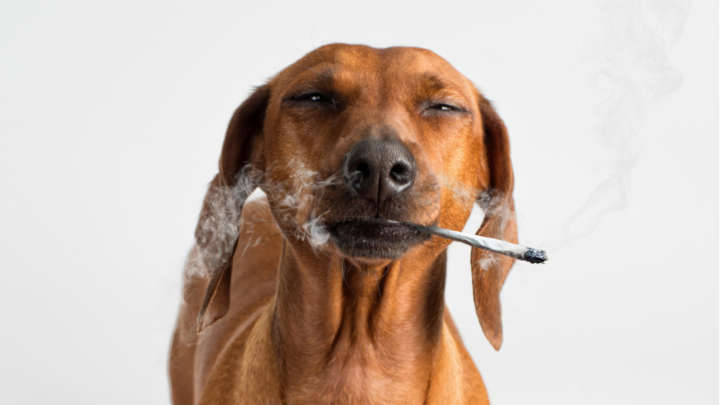 A growing body of evidence suggests that cats and dogs experience therapeutic benefits from cannabis products, just like us humans. Unfortunately for well-intentioned owners and veterinarians, critical information regarding efficacy, proper dosages, and possible side effects has not been established.

One thing that is known, however, is that animals can become ill if they overdose on cannabis products. Dogs and cats display familiar responses after consuming small amounts of the marijuana plant or edibles: lethargy, altered behavior, blood-shot eyes, and slower response times. But if too much enters their systems, our furry friends can experience dangerously low blood pressure and heart rate, loss of bodily control, incontinence, diarrhea, and in severe cases, coma or death.

Due to marijuana’s potential toxicity, it’s essential that owners never leave cannabis products lying about in their pet’s reach.

Though marijuana consumption appears to carry risks for pets that don’t exist in humans, our overall physiology is highly similar. They are vulnerable to many of the same diseases as us, including those that are now commonly treated or alleviated with medical marijuana. And because all mammalian bodies contain similar cannabinoid receptors, it is logical to surmise that pet species can experience the same symptomatic relief from cannabinoids.

Due to marijuana’s status as a controlled substance, however, veterinarians are unable to prescribe or even legally recommend cannabis products for pets. In US states with legalized medical use, physicians may turn to cannabis to help human patients suffering from chemotherapy complications, chronic pain, gastrointestinal symptoms, seizure disorders, anxiety and more – but none of the laws included wording that authorized vets to do so for their patients.

This hasn’t stopped some bold animal health practitioners from selling or supporting the use of pet-specialized medicinals, typically in the form of cannabidiol (CBD) oil extracts. One of several cannabinoid molecules found in marijuana, CBD appears to mediate many of the drug’s fascinating anesthetic, anti-convulsive, anti-inflammatory, and anxiolytic properties. And unlike THC, it does not produce a “high” mental state.

Many in the veterinary research community would like to substantiate the existing anecdotal evidence in favor of CBD-based therapies with clinical trials, yet federal policy has made this endeavor nearly impossible.

In 2016, the Drug Enforcement Agency (DEA) added CBD to the list of the most tightly regulated Schedule 1 substances, alongside the likes of heroin and ecstasy. The classification for CBD could be downgraded, or a path to medical use approved if there was evidence of CBD’s benefit from completed studies. The catch-22 is that many proposed trials are either rejected outright or stalled for years due to unreasonable required conditions.

According to a New York Post article, the University of Pennsylvania School of Veterinary Medicine had to halt investigations into CBD for canine arthritis due to worrisome legal ambiguities.

“Unfortunately there’s not a lot of research out there, especially on animals, on CBD compounds,” Byron Maas, DVM, told the Post. “The research is really necessary to help us understand how to actually use these compounds on our pets.”

Providing a beacon of hope in this quagmire of bureaucratic red tape, determined scientists at Colorado State University may soon provide some published data from their two trials on CBD for canine epilepsy and arthritis.

Furthermore, the American Veterinary Medical Association as a whole is lobbying for the DEA to relax restrictions on CBD.

If all goes according to plan, you and your animal companion could stroll into a dispensary together someday soon.

Mary JaneDont Share Your Marijuana With Your Pets, Yet02.02.2018