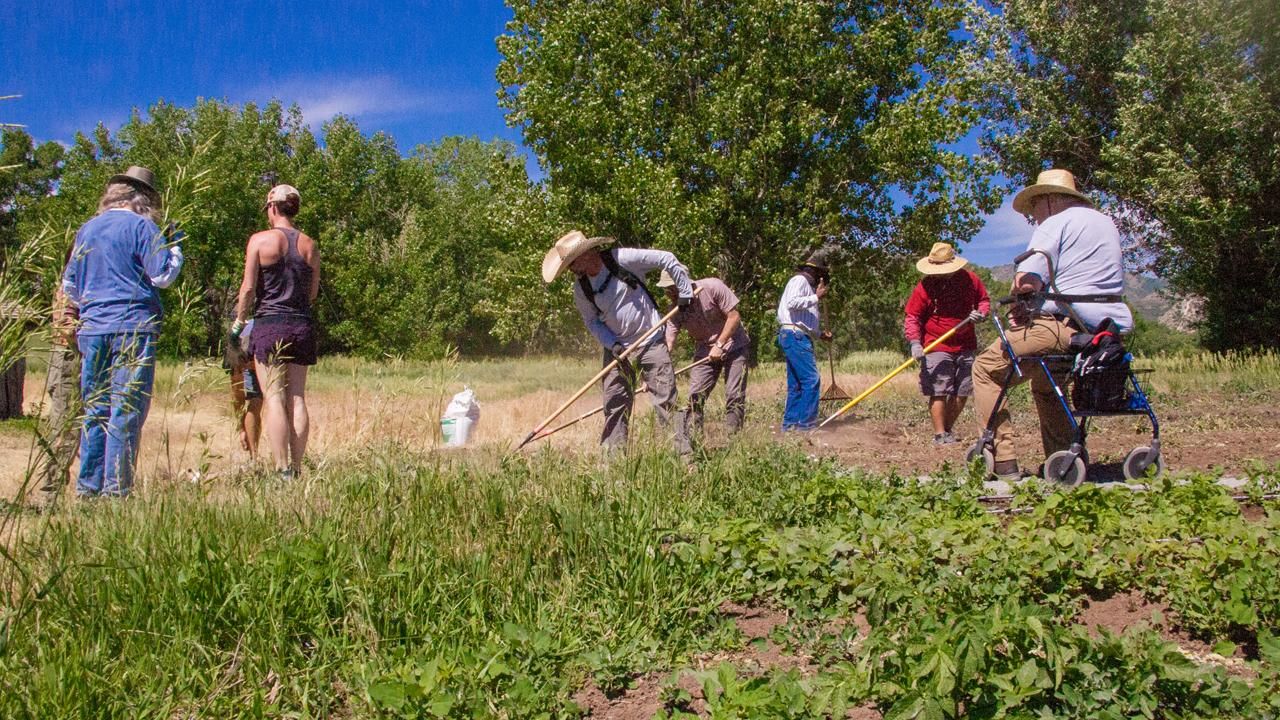 Veterans to Farmers, a farming nonprofit, is helping veterans reintegrate into civilian life, connect with fellow vets and recover from PTSD, by training them to work in agriculture.

DENVER –  An average of 20 veterans commit suicide each year—a statistic that weighs on the mind of Rich Murphy.

Murphy, 38, is executive director of Veterans to Farmers, an organization he joined after suffering a devastating injury and bout with post-traumatic stress disorder (PTSD) in December 2007. Murphy, who had escaped injury during a five-year deployment as a corporal with the U.S. Air Force, was struck in his car at 70 mph by a driver who had fallen asleep at the wheel, leaving him with a horrible back injury.

“One of the number one reactions to PTSD is isolation. People just withdraw, out of fear or that they don’t fit in,” Murphy said. “I had a guy who did the program last year, his wife came up to me and gave me a hug and said, ‘thank you, he hasn’t left the house since winter.’ [Veterans to Farmers] is just opening the doorway for these men and women.”

After his accident, Murphy quit nursing school and found employment as a social worker. It was during a stint working for the City of Denver when he met veterans who he wished had gotten the care and intervention they needed much sooner.

A Marine Corps veteran by the name of Buck Adams had formed Veterans to Farmers in 2013 and Murphy met him in the fall of that year after his wife became aware of the program. The following year, Murphy began to develop a curriculum for the VTF training program. He also crisscrossed Colorado, telling everyone about the nascent nonprofit’s merits, and forging partnerships with Denver Botanic Gardens and Colorado State University.

In 2017, after he’d spent many hours as an instructor, Murphy took over as executive director of the organization when Buck stepped down.

Murphy recalled a full circle moment: During the first two years of VTF, his veteran farmers sold fresh produce they’d grown to his previous clients at the Denver Human Services building—thanks to a grant that Denver Botanic Garden received to set up a food stand in the building.

VTF aims to fill the void between veterans’ skills and the more lackluster jobs the economy produces by training them to work in agriculture. As he explains it, there are also less tangible benefits.

“When you get ten veterans in a greenhouse or out in the field and they start working on plants together, digging in the soil and growing things, you see therapy happen,” he said, noting that traditional therapy is more of taboo word in the military.

Murphy gave Fox News a full tour of Rebel Farm, a hydroponic greenhouse where hundreds of pounds of greens and herbs are grown and harvested each month by former service members. The persistent hum of fans and the sound of rock music filled the temperature-controlled, 15,000-square-foot space. Fellow veterans dutifully checked on the health of kale, arugula and Bok choy that will be harvested and sold primarily to restaurants.

“Eight weeks later, you have ten veterans that are all new friends who never would’ve talked to each other had they not been put in a space together. That’s the process,” Murphy, whose father, uncle and grandparents also served in the military, said. “We see a lot of veterans maintain those friendships afterwards.”

Vets who participated in the program talked about the significance of its impact.

O’Brien, 41, said the type of teamwork and problem-solving skills that come naturally to military veterans are ideal for the country’s food production system, which is undergoing a transformation as consumers demand healthier options and the availability of organic produce increases.

“This bond is what we need among the farming community because it’s a unification of strategy and building something great together that far surpasses the need for competition and secrecy,” O’Brien, who traveled to over 30 countries during her time in the military, told Fox News. “To the core, these men and women are helpers and magnificent leaders and problem solvers—we need this in our food system.”

Marine Corps veteran Dominic Muranyi came across Veterans to Farmers after being unable to enroll in a booked up horticulture course at a community college in Fort Collins.

Muranyi took both courses, finding them to be “immeasurably helpful,” and he’s been working on Murphy’s family farm in Fort Collins, helping out with labor and miscellaneous—including the planned build out of Murphy’s new greenhouse this summer.

MEDICAL MARIJUANA: CAN VETERANS GROW THEIR OWN MEDICINE?

“I was able to connect with some really awesome individuals who are all working toward something similar. You meet so many other veterans who have skill sets and knowledge you didn’t even know existed, then come to find out you need to know it!” Muranyi, 27, told Fox News.

The Marine Corps veteran, who’s known as the “quiet one” of the vets who have taken the courses, has been studying mycology (fungi). He likened the Veterans to Farmers experience to how some civilians may think about the military.

“When you are in the military, no one back home thinks, ‘Oh, I get to go to the movies, better thank a veteran.’ We do our job in silent professionalism and take comfort knowing it makes a difference,” Muranyi, who deployed to Cuba and Japan during his service, explained.

“It’s kind of the same thing as a farmer: How often do you go to the grocery store and look at what farm produced your food? But everyone is grateful to have something to eat. Instead of defending life, we provide life-sustaining food,” he said.

The Veterans to Farmers’ hydroponics course has been taught for the last three years at Rebel Farm’s sprawling greenhouse in southwest Denver, which is owned by Lauren Brettschneider and Jack Olson. During the course, which takes place four times a year and runs for eight weeks, veterans learn the ins and outs of controlled agriculture.

“Farming can be very soothing. You are growing something, creating,” said Brettschneider, who worked in the hospitality and telecom industries before turning her passion for farming into a business. “The class really inspires and motivates [the veterans].”

“How often do you go to the grocery store and look at what farm produced your food? But everyone is grateful to have something to eat. Instead of defending life, we provide life-sustaining food.”

The seedlings are housed in tiny sponge-like cubes to preserve their structural integrity—but they live inside nutrient film technique (NTF) channels, which are long, white plastic tubes that sort of look like gutters on a house. There’s a little drip with a small hose that exposes the roots to oxygen and they’re able to absorb nutrients from the water. The entire system uses very little water and, because it’s indoors, the plants aren’t subjected to the elements and are less likely to have major pest infestations.

According to Murphy, the greenhouse is much easier on the environment in terms of water usage, a real concern during Denver’s dry, hot summers. It takes approximately 10 gallons of water to produce a head of lettuce outdoors, but inside the greenhouse it takes just one gallon.

Veterans who take the course at Denver Botanic Gardens’ Chatfield Farms work in a 7.5-acre, picture-perfect space with the Rocky Mountains as their backdrop and the bright, powerful Western sun as their balm while they learn everything about the day-to-day operation of an organic farm—planting, harvesting, crop rotations as well as licensing, recordkeeping, marketing and selling. This class runs for 10 weeks and there are only two per year due to Denver’s 22-week outdoor growing season.

On a sun-kissed, windy day in late April, two landscaped areas that were built by veterans from the program—complete with a paved sections, winding paths, flower beds and a bench—were easy to find. In the growing area, several raised beds were prepped and covered for strawberries, which are a tough crop to grow anywhere because many different animals and pests love them. A red Norman Rockwell-looking barn on the property has hosted Veterans to Farmers events.

Jamie Wickler, farm education coordinator at Denver Botanic Gardens, is starting his fourth season teaching the veterans’ course at Chatfield. He said the biggest benefit for participants is a sense of community.

“This is a group that deeply cares about sustainable food production,” Wickler said. “Farming is hard work that they love, so to find other veterans and farmers that share that gives them a lot of encouragement and support.”

Military veterans, accustomed to the rigors of discipline, hard work and getting their hands dirty, are well-suited to agriculture careers.

“They can reconnect to their community in a capacity where it feels like they’re contributing, and that’s huge,” said Murphy. “When you give someone food and get to watch their eyes light up and you grew that. It’s a similar feeling to, ‘you honored our country, thank you for your service.’

Rich Murphy, at left, with a range of past and current participants in the Veterans to Farmers program at his home in Fort Collins, Colorado.  (Christopher Carbone/Fox News)

Muranyi recently started working at Hazel Dell Mushrooms Farm in Fort Collins. He helps out at the farmer’s market and spends three days per week assisting with growing and harvesting shitake, lion’s mane and other mushrooms.

“I love the work and it’s given me an opportunity to learn more about fungi,” he said.

O’Brien, who was the first military journalist on the ground in Iraq and Afghanistan, said she wants to further her own agricultural education, find work in the industry and perhaps homestead on her own farm one day.

“Programs like VTF provide amazing opportunities for veterans to do what they are best at: creating, problem-solving, project managing and leading people in a direction that is holistically best for everyone involved,” she said.

The vets in the program take a survey about topics including mental health at the program’s beginning and end to measure its success, but Murphy said the most powerful feedback he gets is when vets pull him aside at the end to explain why it mattered so much to them.

“If you don’t ever become a farmer, that’s okay. But if you find three or four really good veteran friends and you hang out and talk about plants and maybe grow some tomatoes—that’s f—king awesome. That’s a win,” said Murphy.

Christopher Carbone is a reporter covering global affairs, technology and national news for FoxNews.com. He can be reached at christopher.carbone@foxnews.com or on Twitter @christocarbone.