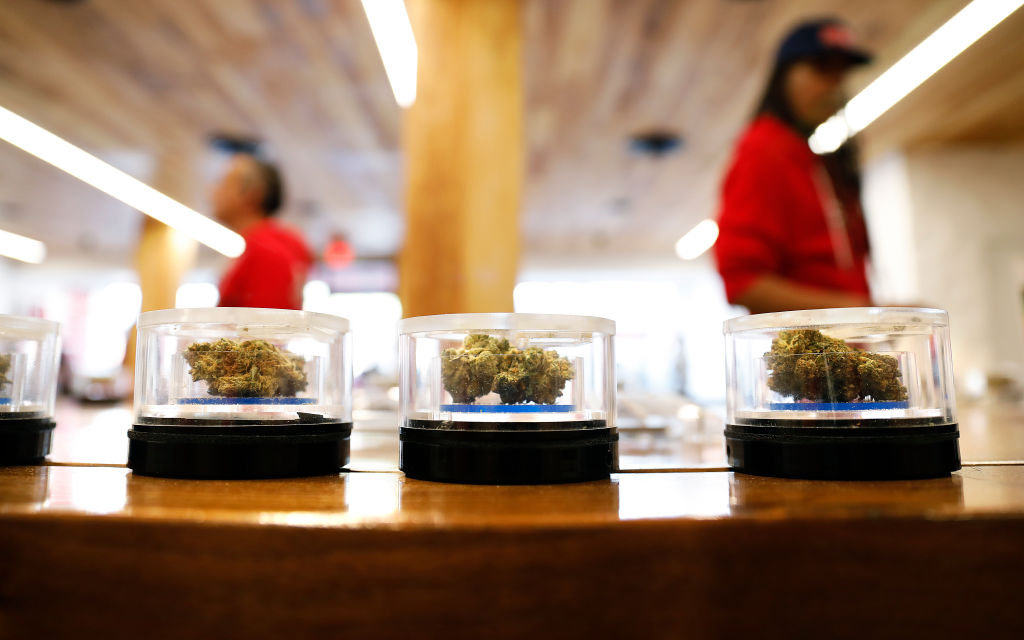 Recreational marijuana might be having its moment, but that doesn’t mean that all the kinks are worked out. Because of laws that still classify it as an illicit substance on the federal level, the banking industry has yet to warm up to the burgeoning weed business for fear of criminal liability.

To alleviate those fears, a bipartisan group of 18 attorneys general from states with recreational and medical marijuana wants to bring the industry’s financial side out of the shadows, and they’re asking Congress for help in a new letter:

The grey market makes it more difficult to track revenues for taxation purposes, contributes to a public safety threat as cash intensive businesses are often targets for criminal activity, and prevents proper tracking of large swaths of finances across the nation.

To address these challenges, we are requesting legislation that would provide a safe harbor for depository institutions that provide a financial product or service to a covered business in a state that has implemented laws and regulations that ensure accountability in the marijuana industry such as the SAFE Banking Act (S. 1152 and H.R. 2215) or similar legislation.

This would bring billions of dollars into the banking sector, and give law enforcement the ability to monitor these transactions.

The weed industry still largely relies on cash — every dispensary has an ATM in the corner — but a few creative solutions exist. One, a company called CanPay, heralds itself as the “first legitimate debit payment solution for the cannabis industry,” offering consumers an app-based debit account linked to their regular banking accounts that circumvents the laws that discourage banks from working with marijuana retailers.

In a statement, California Attorney General Xavier Becerra cited the Trump administration’s increased pressure on states with legal marijuana as a significant obstacle to an industry that is already generating hundreds of millions of dollars in tax revenue across states that enacted legalization.

“Congress has the power to protect a growing $6.7 billion industry and the public safety of our communities,” Becerra said in a statement today. “My team at the Department of Justice is committed to implementing and enforcing the law in California in a way that most effectively protects the health and safety of our people.”

The industry was shaken recently by Attorney General Jeff Sessions’ decision to rescind Obama-era Justice Department guidance around state and federal tension around the issue, informally known as the “Cole memo.” That guidance acknowledged that while marijuana remained illegal on the national level, federal prosecutors could deprioritize enforcement on the issue, leaving the states to handle legality for themselves.

“There is still a lot we don’t know about what enforcement priorities the Justice Department will implement,” Colorado Attorney General Cynthia H. Coffman said in a statement at the time. “I expect, however, that the federal government will continue to focus their enforcement efforts and resources on combatting the gray and black markets and diversion, and not target marijuana businesses who abide by our state’s laws.”

While some state leaders aren’t nervous yet, the shift has made skittish some marijuana-focused businesses and states that are enjoying the tax benefits. Without protective legislation from Congress, a working relationship with the banking industry is out of reach and increased scrutiny from the Justice Department seems imminent.

You can read the full letter, embedded below.

View this document on Scribd