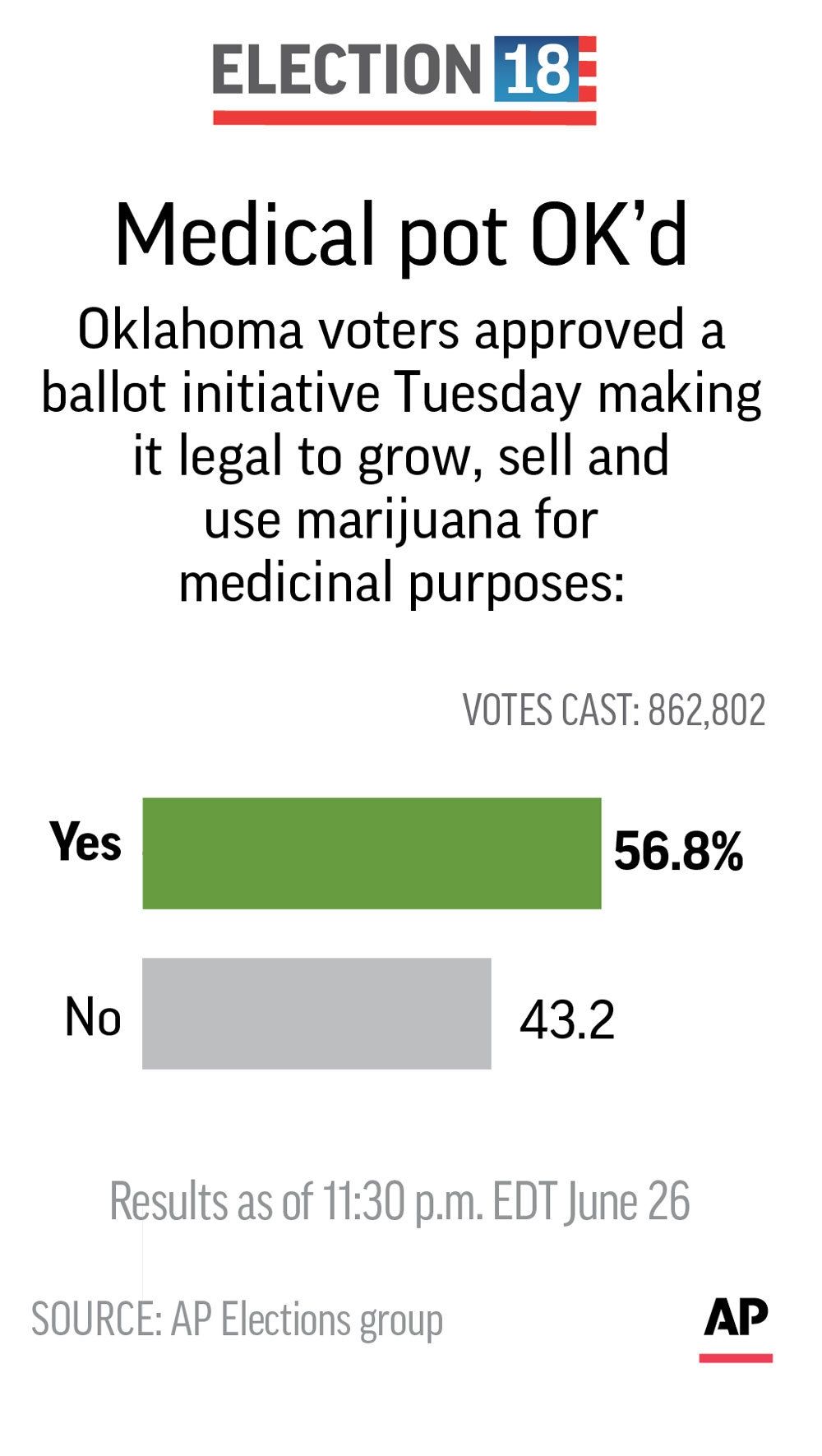 OKLAHOMA CITY –  Oklahoma voters on Tuesday backed the medicinal use of marijuana, overcoming a late opposition campaign from law enforcement and business, faith and political leaders.

State Question 788 , the result of an activist-led signature drive launched more than two years ago, makes it legal to grow, sell and use marijuana for medicinal purposes. The proposed law outlines no qualifying conditions, which would allow physicians to authorize its use for a broad range of ailments — a fact that sparked bitter opposition, particularly from law enforcement.

Under the proposed law, a two-year medical marijuana license would allow someone to possess up to 8 ounces of marijuana, six mature plants and six seedlings, along with edibles and concentrated forms of the drug.

Gov. Mary Fallin said she feared the proposal would essentially legalize recreational pot and said if it passed she would likely call on lawmakers to return for a special session to set up a regulatory framework for medicinal pot.

Oklahoma’s is the first marijuana question on a state ballot in 2018, with elections scheduled for later this year in Michigan and Utah. Voters in neighboring Arkansas legalized the drug for medical use in 2016, but Oklahoma is among the most conservative states to approve its use.

In Oklahoma City, Robert Pemberton, 58, said he supported the measure because he believed it’s been beneficial in other states that have legalized medical marijuana.

A group called SQ 788 is Not Medical launched a late $500,000 media blitz that painted the proposal as a plan to legalize recreational use of the drug under the guise of medical care.

“This is a bad public health policy that does not resemble a legitimate medical treatment program,” said Dr. Kevin Taubman, former president of the Oklahoma State Medical Association and chairman of the opposition group.

Connie Givens, 67, said she voted against the measure because she believes it’s written too broadly and could permit recreational use of the drug.

“I think it’s not written right. I think it’s just so people can get marijuana,” said Givens, a Republican in Oklahoma City.

Although Oklahoma has a reputation for being a conservative state, attitudes have shifted sharply on marijuana in recent decades, especially among young people, said Bill Shapard, a pollster who has surveyed Oklahomans on the issue for more than five years.

“I’ve found almost half of all Republicans support it, so that’s going to take an awful lot of money and an awful lot of organized opposition for this to lose on Election Day,” Shapard said.

Oklahoma’s tough-on-crime ideology also has come at a cost, with the state’s skyrocketing prison population consuming a larger share of the state’s limited funding. In 2016, voters approved a state question to make any drug possession crime a misdemeanor, despite opposition to that proposal from law enforcement and prosecutors.