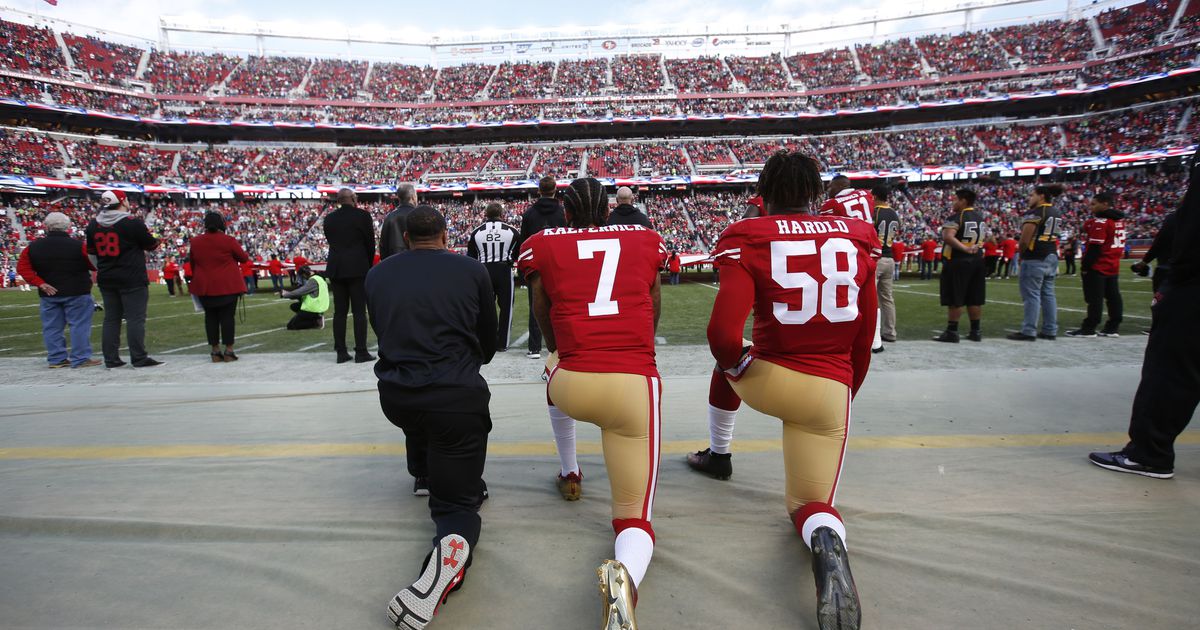 With the NFL a day away from the kickoff of its 2017 season, a definite question has emerged: Is this the year that the NFL finally embraces athletic activism the way the NBA does?

The examples are adding up on a nearly daily basis. A week of preseason football couldn’t go by without players making statements. Members of the Cleveland Browns knelt during the anthem. Michael Bennett sat out the anthem while his white teammate, Justin Britt, placed his hand on Bennett’s shoulder in a show of solidarity. Bennett’s brother, Martellus, made a political cartoon mocking the “stick to sports” mantra and posted it on Instagram. Following the neo-Nazi riots in Charlottesville, Malcolm Jenkins stood for the national anthem with one fist raised, while his white teammate Chris Long put his arm around his shoulder, in a plea for racial unity. In a similar gesture, Derek Carr placed his hand on Khalil Mack’s back during the national anthem.

These can be considered small gestures, but in the NFL, they speak loudly.

Just ask Colin Kaepernick. The former San Francisco 49ers quarterback kneeled during the national anthem before games last year as an act of protest against institutional racism in the United States in regards to police brutality and mass incarceration. Kaepernick’s actions become a national flashpoint, as athletes in multiple sports, former and current presidents, actors and artists alike chimed in.

Not everyone was on board. Some fans even started a campaign to boycott the NFL. After opting out of his contract with the 49ers this offseason, Kaepernick has not been able to find work in the NFL. He has been passed over in favor of a retiree, fringe college prospects, even a real estate agent. The situation has led to rumors that Kaepernick is being blackballed in a concerted effort to keep him off the field. At the least, there are allegations that certain owners and general managers would like to make an example out of him.

Kaepernick’s struggle speaks to just how little the NFL has tolerated activism. But if his tribulations have been an effort to keep Kaepernick’s message from spreading within the NFL, they should be considered a failure. Despite the precarious situation Kaepernick finds himself in, activism is now far from the exception.

And with Week 1 of the NFL season about to start, the expectation for more is palpable. For every fan that turns the TV off at the sight of an athlete kneeling before the flag, there is a concerned citizen marching to the NFL’s headquarters in New York and demanding an explanation. Another one buys a Kaepernick jersey, which remain popular even though he’s not in the league. The NFL, it appears, does not wish to cater to this particular demographic but they, like the athletes the NFL employs, have made this much clear: The more the NFL tries to pretend the people who support Kaepernick are irrelevant or simply don’t exist, the louder they’ll get—all the while assuaging concerns that Kaepernick would be a financial liability for ticket sales.

For two years in a row, despite the league’s best efforts, social activism and racism are going to be the off-field story of the NFL season. And it’s starting to follow what’s happened in the NBA.

In profession basketball, activism isn’t the exception among its starts—it’s now the expectation. Examples are almost too numerous list, but here’s a sampling: Last year, LeBron James, Carmelo Anthony, Dwyane Wade, and Chris Paul donned all black on at the ESPYs aware show to discuss gun violence and racial profiling, and implored other athletes to get educated and involved. Anthony even marched with protesters in Baltimore, where he grew up, following the death of 25-year-old black man Freddie Gray, in the back of a police van. Just this offseason, Kevin Durant said he would not go to the White House if the Golden State Warriors were invited, a long-standing tradition for NBA champions. He also voiced disrespect for the current administration.

Durant could speak out against Trump and trust that he could have the support of the majority of his fans, the NBA’s commissioner, Adam Silver, and his locker room, headed by coach Steve Kerr, who publicly made his opinions on this administration clear. There is a great deal of organizational unity and progressive political thinking in the NBA, which makes it easier for players to speak up. They’re also more financially secure, with guaranteed contracts and higher salaries. And the NBA’s fanbase skews younger, more diverse, and more progressive. Social activism, for NBA players, might even be more profitable than silence.

All which is to say that NFL players will likely always face impediments that NBA players won’t, but that hasn’t stopped them from exerting their power like never before.

2016 was the year that everything converged. Social media collided with the specter of the presidency of Donald Trump, and all the while videos of violent, racist police brutality sprung up alongside protests, alongside an ugly, once-quieter call for white supremacy. There wasn’t a single social media platform in which racists didn’t congregate publicly, espousing retrograde views on their perception of inherent superiority. As a result, race and politics have leaked into every aspect of our culture. Today, to be a modern content consumer is to have an acute understanding of the phrase, “everything is political.”

For a professional black athlete, with a platform that—at the click of a button—can morph into a formidable pulpit, heeding the old mantra “stick to sports” has become an impossible proposition. This NFL season will be a battle for the life and death of that mantra, for the insistence that black athletes should no longer have to serve as an on-field distraction from the very issues that are vital to their survival off the field—a battle over personal dignity and self-expression, for the right of an athlete to never have to choose between his life and his livelihood, like Kaepernick did, ever again.

WATCH: An army of robots planned, designed, and built this 3-story house from the ground up